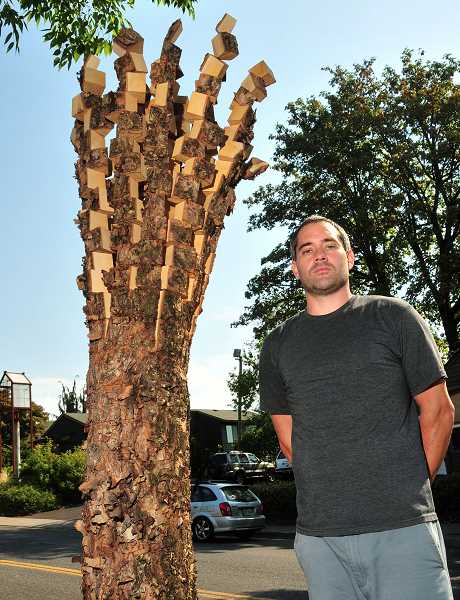 Wisps of cubed block chains from woody material of a rotted and dying ash tree are reminiscent of singular human hair strands that might otherwise signify a frazzled, sick or unhealthy condition.  The parody provides a dying aesthetic as found within ash trees, where what was once considered beautiful has succumbed to a slow death by infestation of the emerald ash borer.  This sculpture simultaneously allows for death and demise of natural aestheticism while claiming a wholly human constructed one.  In continuing direct blasphemy of Leonardo Da Vinci and his masterpiece (the Mona Lisa, otherwise known as La Gioconda), which is constantly appropriated for advertising and constant reinvention by modern lore for materialism—this sculpture from a dying tree is yet another example of conceptual theft of Da Vinci in title.  As response to Duchamp and Dali alongside many other modernist thinkers and makers, the sculpture takes a once living and breathing aesthetic and creates something anew in appropriation of how and why the definition of beauty changes.  In title this sculpture mocks and rejects accepted beauty and narcissism invested in contemporary adverts, which create a façade of reality through image-based society consumerism and with a pastiche mentality.  The conundrum of any work implies (like everything that possesses life or created through existence of life) merely as a transition into the annals of whatever exists beyond.  As witnessed over a history of time, the epitaph of what existed before is ultimately all that remains in the end.